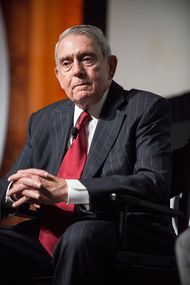 "Cruel and unusual," the phrase rings in my head as I read the press reports of President Donald Trump's proposed budget.
But to even talk about it as a budget is to miss the point. It is not a budget. It is a philosophy, and one that may come as a surprise to many of the people who voted for Mr. Trump. They will hurt in real ways. Meanwhile it confirms the worst existential fears of those who see his presidency as a threat to the very being of the United States they know and love.
This is a man who made a lot of promises on the campaign about helping those struggling in society, about leading the United States to greatness in such things as fighting disease. If anyone had any doubt about the hollowness of his words, this philosophy is all the evidence one would need.
This is a philosophy that doesn't believe in helping the poor, rural or urban, or the power of diplomacy or the importance of science. It is a philosophy that doesn't want to protect the environment. It doesn't believe in the arts. This is about putting a noose around much of the United States federal government and hanging it until it shakes with life no more. In the name of reining in waste, it rains pain and suffering amongst the Americans who already are the most vulnerable. It must be remarked that many of these programs are really small budget items in the greater scheme of things, rounding errors in the federal budget. The purpose is to send a message, not to save money.
Rather than investing in what truly will make America great, this philosophy pounds its chest with false bravado. People will die because of this budget. People will suffer. Diseases will spread, and cures will not be found (really? slash science research?) Our nation will be darker and more dangerous. You know it's a philosophy because the budget has few details really in it. And here is where I see its saving grace.
This philosophy is not the United States I think a majority of Americans would recognize. I believe that we are not so cruel, so shortsighted, so dark. It's easy to rail against the federal government on the campaign stump, but cutting programs that people rely on, that is the kind of thing that can break through the fake news into reality very soon. We have already seen the mess that has become of the health care efforts.
This philosophy is no longer theoretical and it will be a rallying cry for a reverse philosophy. Those who champion an empathetic America, an America prepared for the challenges of the modern world, will have plenty of evidence to point to. Mr. Trump has already put many Republicans in Congress on a defensive footing, on Russia and on healthcare. Wait until the constituents start calling about how they won't be able to heat their homes in the winter or the agricultural programs that were slashed.
"The administration's budget isn't going to be the budget," Senator Marco Rubio told the Washington Post. "We do the budget here. The administration makes recommendations, but Congress does budgets." You can expect to hear a lot more of that kind of rhetoric.
Mr. Trump's philosophy is an opening salvo in a battle for the soul of America that is only beginning. This will be a battle fought trench by trench. But I think it is winnable and America will reconfirm a governing philosophy that is hopeful, compassionate, and wise about the role of government in making our world a safer, fairer, and more just place to live."
Dan Rather @theDanRather
Powered by